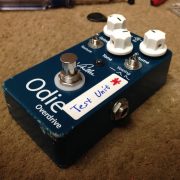 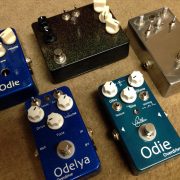 Back in 2007 I started dreaming of owning my own boutique modded overdrive pedal. The more I looked into it though the more drawn I was to the idea of building my own. Eventually I put together a pretty killer sounding true bypass TS clone with some tonal improvements and a clipping switch using a PCB from a pedal kit company. It sounded really good and I began selling them $150 in early 2008. I sold a few locally including the prototype which I sold to well known metal producer Mark Lewis of Audiohammer Recording Studios in Sanford. Mark has been using that pedal ever since and it’s appeared on numerous albums by artists such as Daath, Devildriver, Whitechapel, Unearth, Carnifex, Death Angel, Battlecross, and Trivium.

After having some success I began looking into producing my own PCB and adding some options to the pedal that would give it more flexibility. The idea was to give players a pedal that was not only useful in more situations, but also give them some extra flavors to keep them from getting tired of their tone. The big idea was to move the clipping section to a module that could be swapped out to provide more clipping options. It took quite a bit of research and some trial and error before I finally landed on the PCB design and components I’d use. I even built two monstrosity overdrives with way a couple of 12 position rotary switches (among other things) to help figure out which clipping options to use. In December of 2009 I began selling Odelya. Though most of the components were identical to the original Odie, I decided that since this version had so many more options it needed to have a new name to separate it form it’s predecessor. Odelya was quite the box of options. It contained an interchangeable module containing clipping diodes, a bass switch that altered the overall EQ curve, a voltage doubler that could be activated via an internal toggle switch, and a socketed op-amp. All this was packed into an enclosure the size of an MXR Phase 90. It was also true bypass and handmade at $175.

In early 2010 I approached Dave LaRue (bassist for The Steve Morse Band, Flying Colors, John Petrucci) for help getting in touch with top level guitar players to try out the new pedal. He expressed to me that he was actually looking for a new distortion pedal for his rig. I got one to him and he really like it. He actually ended up letting Glenn Alexander, the guitarist from Dave’s NY project, Stretch, play through it and Glenn didn’t want to return it so I had to send him another one. Since then Dave has been using it in various projects and recordings including both Flying Colors albums. He and Glenn are now both using the new Odie.

I was quite please with Odelya and how it had been received. It delivered great tone and clarity with tons of options in a tiny package. It did have two issues that I felt needed to be addressed. It’s biggest downfall, as pointed out in a 2010 review in Guitar Player Magazine, was that it had a lot of options, too many for most people to care to mess with. I discovered that, though the module idea was cool, the tonal differences were a bit subtle and most people liked the stock module well enough that they didn’t have any interest in changing it out. Also the module construction was pretty involved, taking almost as much time as building the rest of the pedal. The other issue was that some of the pedals suffered from excess switching noise. It was nowhere near what you might find some vintage pedals, but it was more than it should have had.

In late 2011 I decided to start working on a revision that addressed these two issues. I spent the next two and a half years trying different combinations of module and complex switching (relays, micro controllers, etc). It became a back burner project since I was always so busy with repairs and instrument builds, but every few months I’d mess with it again and build yet another prototype that didn’t quite satisfy. It wasn’t until early summer this year (2014) that I finally decided to simplify the whole process. I spent some time comparing the switching noise from Odelya to several other well known true bypass pedals that used the same type of switch configuration. What I discovered was that they were getting better results with exactly the same switches and wiring, but their boards were a good deal simpler in design. I decided that it wasn’t a more sophisticated switching that would be quieter, but a simpler PCB layout. I kept all the great tonal qualities of Odelya and trimmed the fat a little. Since I only ever had one guy tell me how much he loved using it at 18 volt I removed the voltage doubler from the board. It’s still capable of being run at 18 volts using an 18 volt power supply, but this removed a lot of components. I also removed the module socket and decided instead to use three of the more unique and usable clipping configurations. This cut build time in half and freed up a good bit of room on the board. I spend a long while redesigning the PCB and eliminated some parasitic capacitance that had contributed to switching noise in some of the Odelyas. I also took this opportunity to move the controls around a bit to make the pedal a little more rugged and moved the DC jack to the back to make it easier to use on a peal board.

The result of all of these changes was an overdrive that was very versatile, clear, and free of noise. It retained the tonal quality of Odelya, but without all the extra complications I realized that it was a lot closer to the original Odie from 2008. I decided to name this new version Odie to help distinguish it from Odelya’s module capabilities, though in truth they sound virtually identical. If anything the new version sounds a hair clearer and still has more options than most people will need. The biggest differences are that there’s less to go wrong and it requires a lot less time to build purely because of the lack of modules. Because it’s so much simpler to build I can afford to offer it at a much more competitive price – $100.

Already I’ve produced and sold more of the new Odie pedals than I had Odelyas and Odie has only been on the market for 6 weeks. Currently I expect to build 50 per month and bring production up to 100 per month by the spring. They are all (as all versions have been) handmade and individually tested.

The Odie Overdrive has been making its way into the hands of guitar players all over the US since mid July. I got a chance to hang out with one of those guys last week and shoot some video of exactly what he likes about his new overdrive pedal and how he’s using it.

I’ve known Jim Gentry pretty much since I started working on guitars back in the 90’s.  He’s a super nice guy and a killer player, but he’s also got got a head for electronics and tech.  When he came by the shop with his amp to check out an Odie I played around with some video trying to capture exactly what he was getting out of it, but the audio didn’t turn out too well.  He bought the pedal and took it home and I later told him that the video wasn’t usable.  He said I should come by his studio some time and we could try again. This time I made sure to gather more recording equipment than I needed along with a couple of cameras and met him at his studio one evening.

Looking back and having been through the video several times in editing I think my favorite part about the experience is that we didn’t talk about the pedal at all before shooting.  We didn’t discuss what he would or would’t say, we just sat down, hit record and went for it.  Of course that meant a little extra edit time on my part, but I really only took out a couple of small sections where he restated something more than once.  I know it’s still a bit long (almost 11 and a half minute), but he was s o thorough that I couldn’t find much that I felt I could cut.  Enjoy the demo, it’s also available on YouTube and on the Odie product page. 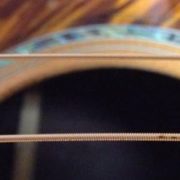 See the rust? This is a brand new set of DR strings in their corrosion protection envelope. The reality is that in Florida I have only seen two brands that offer true corrosion proof packaging (though there may be others I’m not aware of). I’ve been using D’Addario strings for years and always have fresh clean strings even if they’ve been on the shelf for two years. Ernie Ball has recently introduced a similar technology that seems to work as well as D’Addario’s. If you use any other brand be sure that you buy fresh strings and not sets that have been on the shelf for a while. 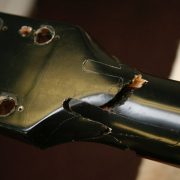 Not your typical broken headstock repair, this Gibson SG headstock had already been broken and repaired twice. The third break proved the worst, breaking even the splines that were used in the previous repair. It was time for more drastic measures and so the old headstock was removed and a new one was grafted in with proper grain orientation to prevent future breaks.

This was the third time this SG headstock had been broken.

Blending contours of the new headstock.

Removing serial stamp from the old SG headstock to graft into the new one.

Serial stamp glued into the back of the new headstock.